As free as a bird in the Dolomites!

Of eagles and adventures…

“Get up, get up!” My boyfriend is particularly euphoric as he wakes me up this holiday morning. I try to resist his alarm call but, after three more shouts of “Get up!”, curiosity wins out.
sharetweetpinmail
But why is he so motivated today? And then the penny drops: hiking is on the programme! Into the mountains, which he’s been looking forward to for months - the flatlands around our North German village are, for him, “totally boring”. And of course I don’t want to spoil his fun! So I make an enormous effort and swing my legs out of bed. After all, there is a healthy, hearty breakfast buffet awaiting me here at the Hotel Engel - what better way to console me for my early start?!

Sitting on the terrace eating breakfast a short while later, I look at the untamed forests and lofty mountain peaks and truly become aware of the power that lies dormant within them. And before I notice it, I too am gripped by the sheer joy of being in the mountains. Onwards and upwards - the Dolomites are calling!

The euphoria of the climb
We borrow rucksacks, trekking poles and a hiking map from the hotel and just a few minutes later we are sitting in the cable car, soaring up into the airy heights from Welschnofen to the Frommer Alm. We are making for the Hirzelweg trail, one of the finest hiking routes in the area and certainly the best one around the Rosengarten massif. According to the guide book it is of medium difficulty – so just right for us! The chairlift takes us up to the Kölner Hut at an altitude of 2,337 metres and I involuntarily hold my breath: the view is simply overwhelming, just like something from a film. My boyfriend was not exaggerating when he described the Dolomites in glowing terms to encourage me to come hiking. The sun climbs to its zenith and the view is wonderfully clear, just like the sky.

In the garden of roses
We walk along path number 549, the Hirzelweg. Sometimes a little up, sometimes a little down, but mostly just under the steep walls of the Rosengarten. Facing us on the horizon is however a seemingly endless chain of mountain peaks, some in the background and others in the foreground and, although we have no idea what they are called, we feel somehow connected with them, as if they were our minders. For quite some time we walk deep in thought until we reach an eagle in bronze, a grand monument erected at 2,349 metres in honour of Theodor Christomannos, who (as we read while planning this tour) was responsible for the expansion of the Eggen Valley’s infrastructure and thus for its accessibility and tourism. Time of course for a selfie! “Look, what’s that?” - I tap on the camera on the front of my smartphone, thinking that a fly has landed on it. But the tiny brown dot does not go away and I instinctively turn and look beyond the bronze eagle towards the mountains - “Wow! What’s that enormous bird?!”. We are totally excited and have to concentrate to see what it is. Apparently weightless, the huge creature wheels among the rocks, almost as if conscious of everyone watching on in awe: next to and behind us more hikers have now gathered, all gazing into the sky. “A golden eagle!” exclaims one of the onlookers, while someone else has already brought out a professional camera from their rucksack and is taking photos. Then a second bird arrives and they soar together between the mountain peaks before plunging down into the forest. Wow! We are beside ourselves with joy and need a moment to recover, because even we know that golden eagles are extremely rare. Especially two at once!

A culinary highlight
So now it’s a selfie with the bronze rather than the golden eagle! Quite delighted by this memorable event we walk, together with another couple who also saw the two eagles, “down” to the Rotwand Hut at 2,283 metres. It is now past midday and we have been going for nearly two hours and, while the fabulous scenery of the Dolomites, the walking and above all the encounter with the golden eagles have all definitely satisfied our spirit of adventure, our stomachs are most certainly hungry. We need some speck dumplings to fill us up! Not to mention some goulash, pasta pockets and a glass of shandy - proper South Tyrolean mountain fare. Then, after lunch, we sit on the terrace with our new friends, chatting about this and that, while our gaze wanders over the mountains. Everyone is secretly looking for the pair of eagles that must surely be nesting somewhere in the rock walls. We continue to do so even later that evening as we enjoy the superb views of the Rosengarten from the hotel terrace. We drink a glass of Pinot Bianco to our day’s hiking: it has been a real adventure and, when I think of the morning, I would not now swap the memory for any bed in the world!
Would you too like to experience a day like this? The Engel Gourmet & Spa in Welschnofen is the perfect place to start: at the foot of the Dolomites you can enjoy a wide range of activities with several guided hikes a week - for all levels of ability! Come and savour the mountain experience.
All postings 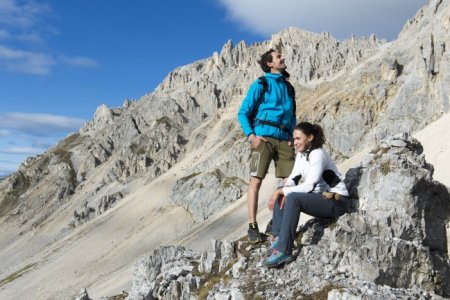 04.09 - 28.10.2022 from € 1.220,-A holiday spent feeling the force of the Dolomites, experiencing them up close. Benefitting from the energy of the surrounding nature, getting to know and learning to love it. Deliberately, authentically, unrestrictedly. A holiday spent at the Engel – a holiday in the heart of the power spot Dolomites.More info
You are here: HomeSouthTyrol›engelsPostengelsPOST›As free as a bird in the Dolomites!As free as a bird in the Dolomites!
Make a request here
OK
This website uses cookies. The use of cookies is regulated in European Directive 2009/136/EC (E-Privacy). We also use the Facebook pixel and Remarketing technologies from Google. By clicking on "OK" you agree. To protect your privacy, you can customize your preference management regarding online advertising in the current browser here. To stop third-party tracking technologies used on this website from using your information for personalized online advertising, click "Opt-Out".